Paul grew up at Wauchope, a small NSW town. While a teenager, he applied to join the Air Force and made his first trip to Sydney. What fascinated him most was the lift he took to reach the 22nd floor interview room – he went up and down three times just for the enjoyment.

In the Air Force, he first flew helicopters in New Guinea, servicing the inland inhabitants. He graduated to flying the F-111, a supersonic (Mach 3), medium-range, multirole combat aircraft – “as smooth as a Cadillac to fly”, Paul said.

While based in Brisbane, he would sometimes “take a break” grab an F-111 at nearby Amberley Air Force base and ‘disappear’ for a couple of hours, while he flew south, across Bass Strait, over Table Cape and further south before flying over Hobart and heading back to Brisbane. On these jaunts, he looked down on Boat Harbour; he wanted to take a closer look. Paul and his wife moved to Boat Harbour 13 years ago and Paul does his Air Force job from there.

Paul then switched focus and gave an overview of Australia’s defensive strategy. He pointed out that there is a “hell of a lot of water” that an enemy has to get across to reach us and this is a serious deterrent.

The Five Power Defence Arrangement (Australia, Malaysia, New Zealand, Singapore and the United Kingdom) has its base in Malaysia and an Australian has always been the Director – Singapore and Malaysia could never accept that one of them should be in control!  Under this arrangement, there is frequent war ‘games’ held in this south-east Asian region.

Australia also works with other, more distant nations, such as UK, USA and Japan on defence issues.

In short, Paul sees Australia as being relatively safe as a nation due to its distance from everywhere else and by the apathy of its citizens. 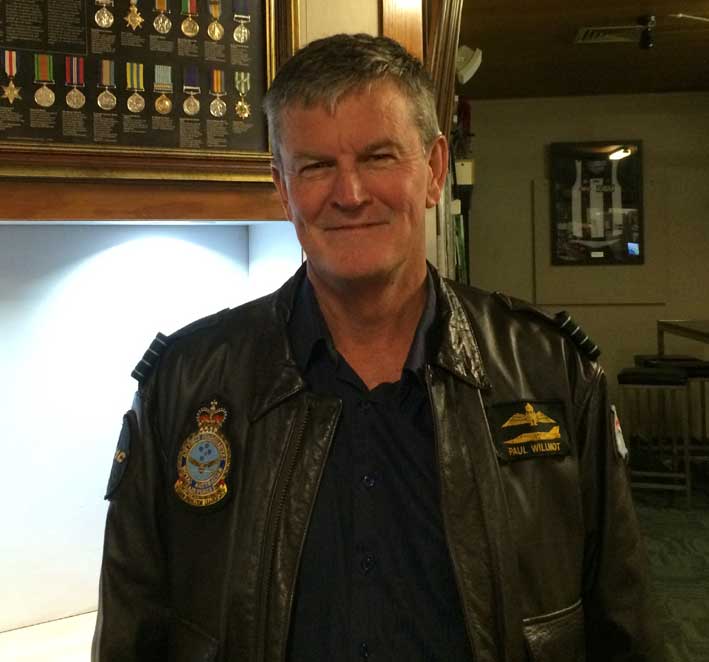 In late February, our Guest Speaker was Mr Ben Hughes of Launceston, who is diligently working to set up Men’s Tables in Tasmania – the 55th table in Australia recently began meeting in George Town.

A Men’s Table begins with two or more men wanting to meet. Membership of any Table is capped at twelve; there can be several Tables in any one town. There are only a few simple rules:

The members of Burnie Rotary club were able to identify several ways in which they could assist Ben in his quest and these will be worked on during the next few weeks.

Chandra focused his talk on his experiences growing up in Sri Lanka.

He told the story behind the country’s flag: The four leaves refer to the four Buddhist virtues of loving-kindness, compassion, sympathetic joy and equanimity; the sword held by the lion reflects the sovereignty of the nation; the green stripe is support for Muslims and the orange for the Tamils (during the long war in Sri Lanka against the Tamil tigers, each tiger wore a cyanide capsule around his/her neck).

The National bird is the Rooster and the Water Lily is the National flower.

Chandra told of the age-old custom of preserving meat in honey; the meat is first dried and then immersed in honey. 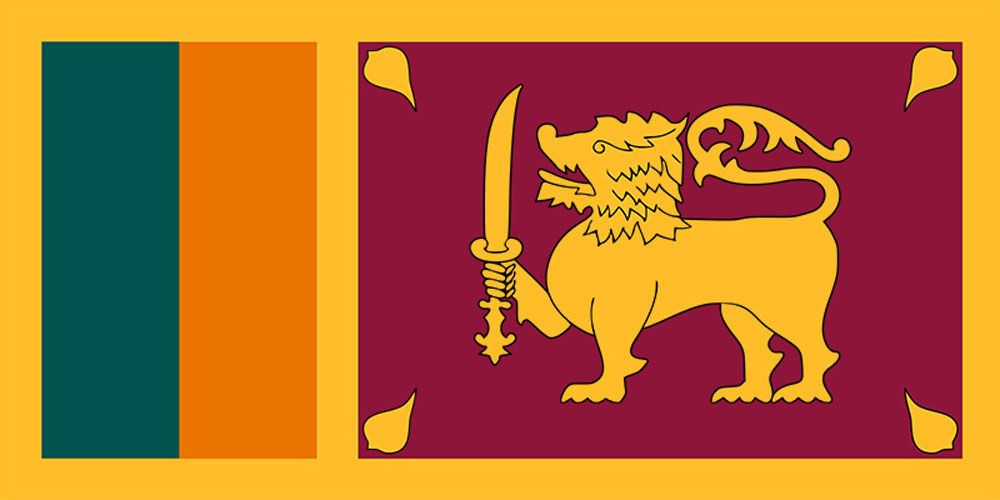 The Cabinet of the governing party in Sri Lanka has been a “family affair”, he said.

[Just a few hours after Chandra told us this, the Sri Lanka cabinet resigned in recognition of escalating popular demonstrations against the government. “Only the president’s brother, Prime Minister Mahinda, stayed on as the government grapples with a major economic crisis. Earlier, the President, Mr Rajapaksa, invited opposition parties to join the cabinet.” https://www.bbc.com/news/world-asia-60975941 ]

At right, Chandra is seen in national dress, with Pres. Themba in his usual winter jacket

Chandra showed us a picture of a huge castle built in the 5th Century on top of a massive rock. “Nobody knows how it was done.”

To reach his secondary school, Chandra had to climb 145 steps each day.

Chandra showed us images of objects he created during his school years. One such object was a tower, similar to the Eiffel Tower, made from finely cut match-sticks – he would split one matchstick into 64 smaller sticks and the tower comprised 25,000 small sticks. If he sneezed, he would have to begin again! 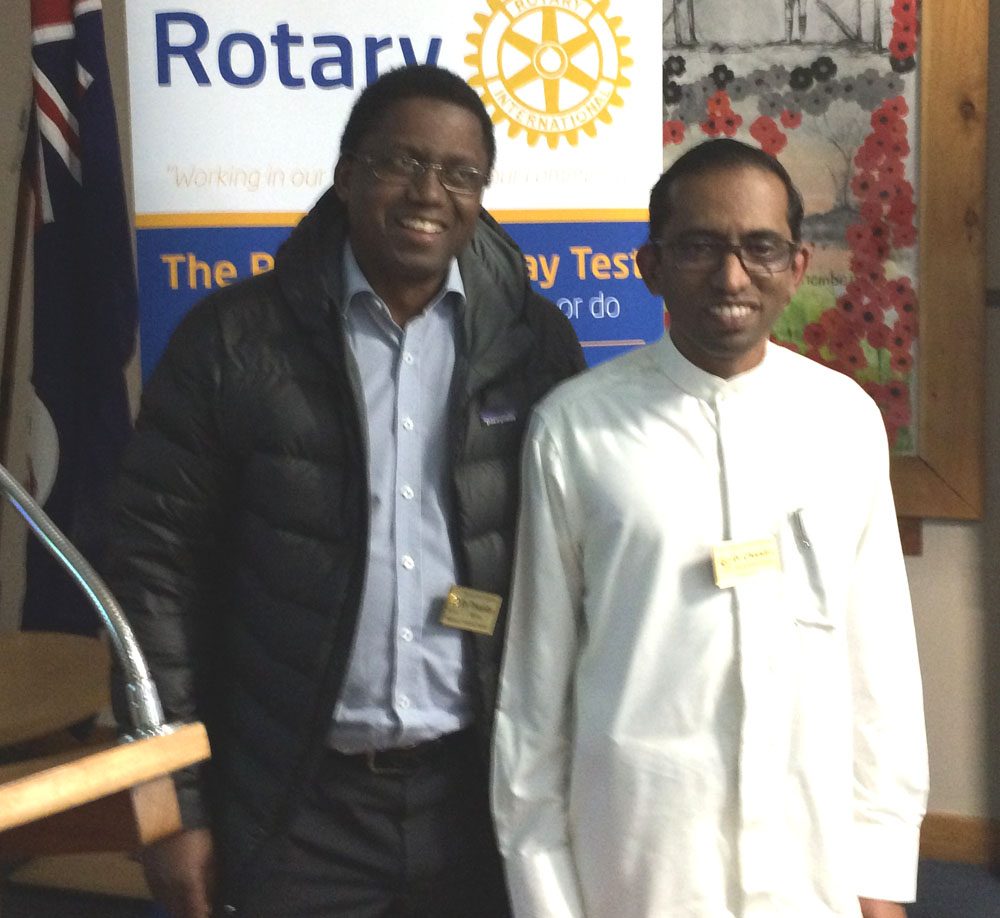 At the Burnie Rotary club meeting on 4th April, Past President John Glen explained how Rotary is helping in Ukraine and adjoining countries.

In Australia, John said, the smart approach is to rely on RAWCS (Rotary Australia World Community Service), which has set up a fund – “Ukrainian Humanitarian Relief Aid” for donations. The current goal is to raise AU$5 million. RAWCS is working in conjunction with the Australian Federation of Ukrainian organisations and Caritas Ukraine. This is the largest tax-deductible effort in Australia aiding Ukraine.

John urged our club, plus other Australians and Australian companies to donate into said fund. Go to <https://rotarydistrict9675.org/Stories/rawcs-ukraine-appeal>

THANKS to all our Golf Day Sponsors

Burnie Rotary Club is extremely appreciative of all the sponsors of our annual Charities Golf Day. Without these good souls, the club could not hope to organise this Day.

THANKS TO EVERYONE LISTED BELOW. 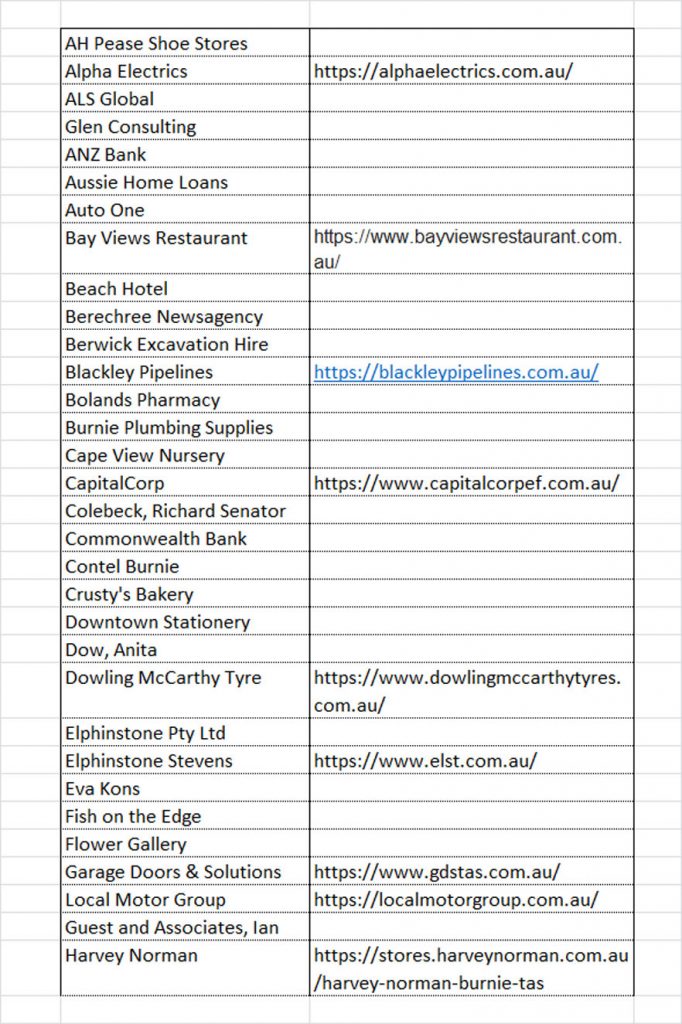 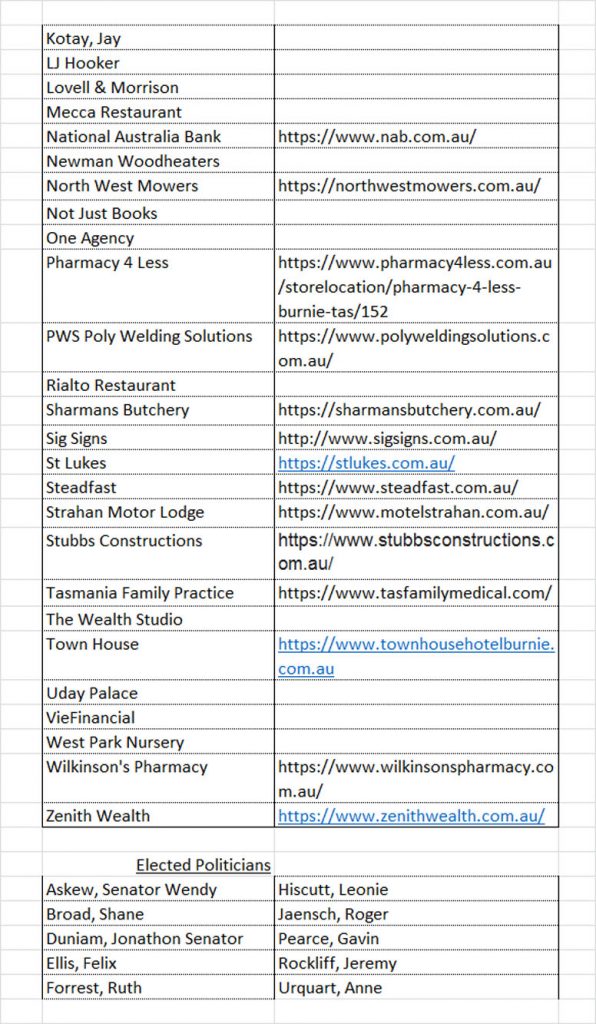 On Sunday, Mar. 27, the Rotary Club of Burnie will put on its 2022 Golf Day. This fantastic day will be held at Wynyard Golf Club, but in all other respects, it will be the same great day of golf, fun and with prizes  for all, which the Rotary Club has run for over 30 years.  If you have not yet advised us of your intention to attend and play golf, PLEASE contact any of the following right now:

DO THIS RIGHT AWAY!!

The Power of Surf Lifesaving Clubs

Shane Askew is president of Burnie Surf Lifesaving Club, which is over 100 years old. With close to 400 active members, the Burnie club is considered Tasmania’s foremost club. It also competes successfully in local, state and national competitions. Shane pointed out that from December to March each year, the Burnie club has about $60k worth of rescue equipment at the beach and this needs around $10k per year to maintain. The club receives no regular income, so this is a challenge. Given that the Burnie club must patrol both West Beach and also the beach to the east of the Yacht Club, their existing IRB (Inflated Rescue Boat) is indispensable, but unfortunately this boat is 15 years old now and the club is very keen to obtain a new IRB. Their efforts to this end have been very credible, but the club is short of the final $6,000 needed to buy a new boat.

In the photo below, Stuart and Shane are flanked by Pres. Themba and David McCarthy. 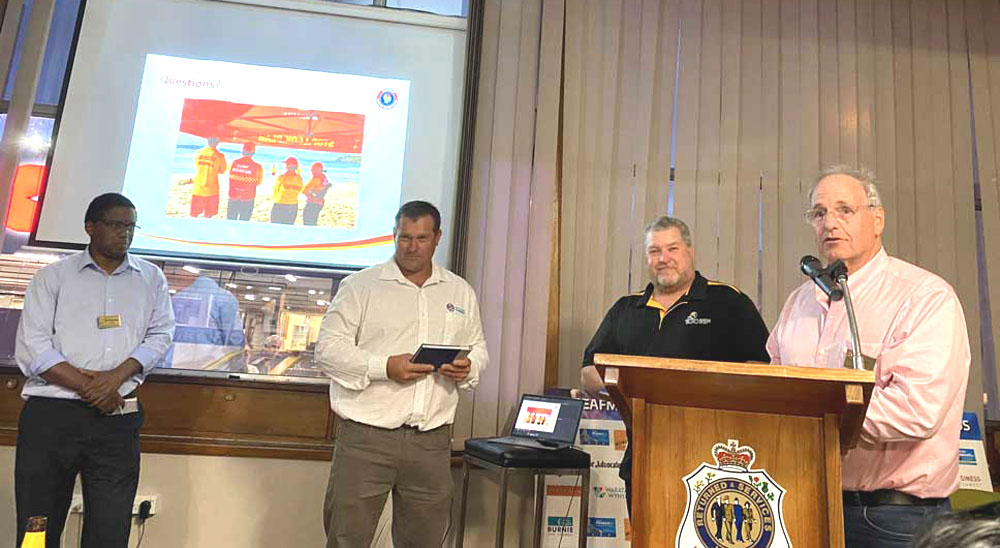 Burnie Rotary Club was pleased to help a very community-minded local group to conduct a new event for the public; a “Slime Run”. This was not a race, but just an opportunity to have fun – albeit finding oneself covered in slime in the process.

At right, the eager runners and the fun that resulted. 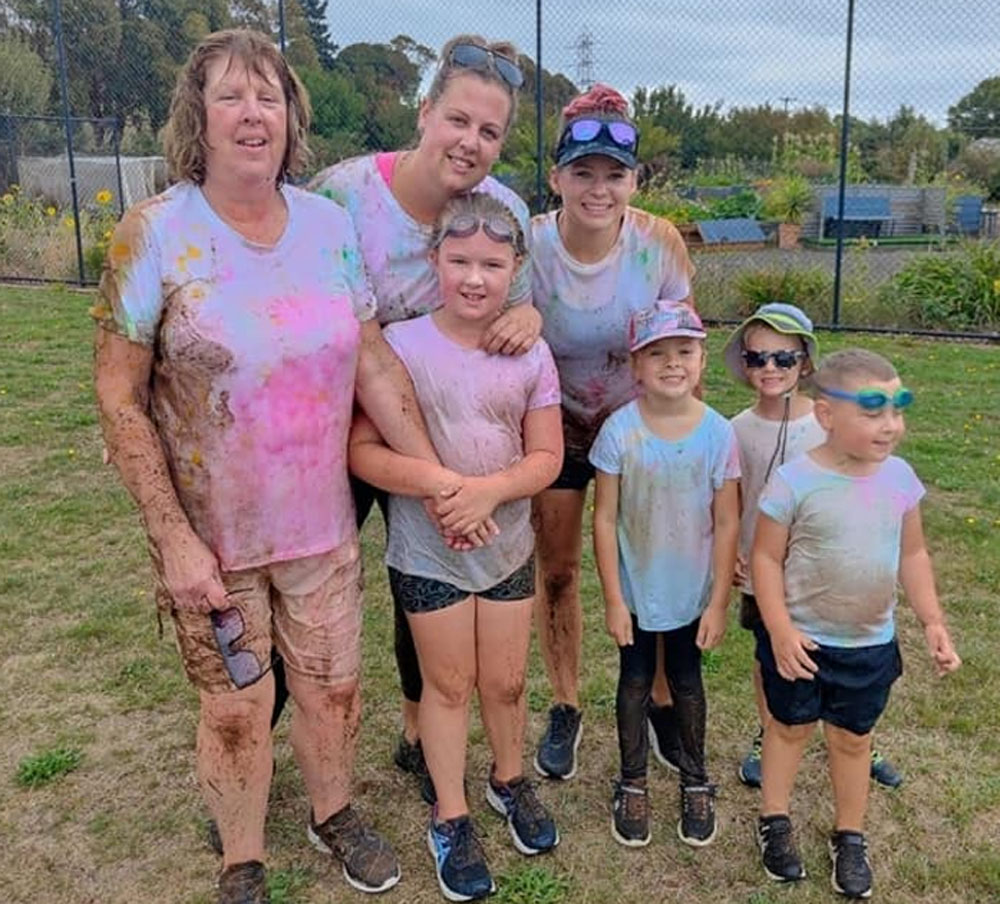 Rotarians assisted, but stayed out of the fun! At left, Roopa is in the control centre and at right, Pres. Themba helped wash off the slime afterwards. 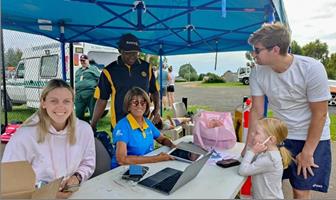 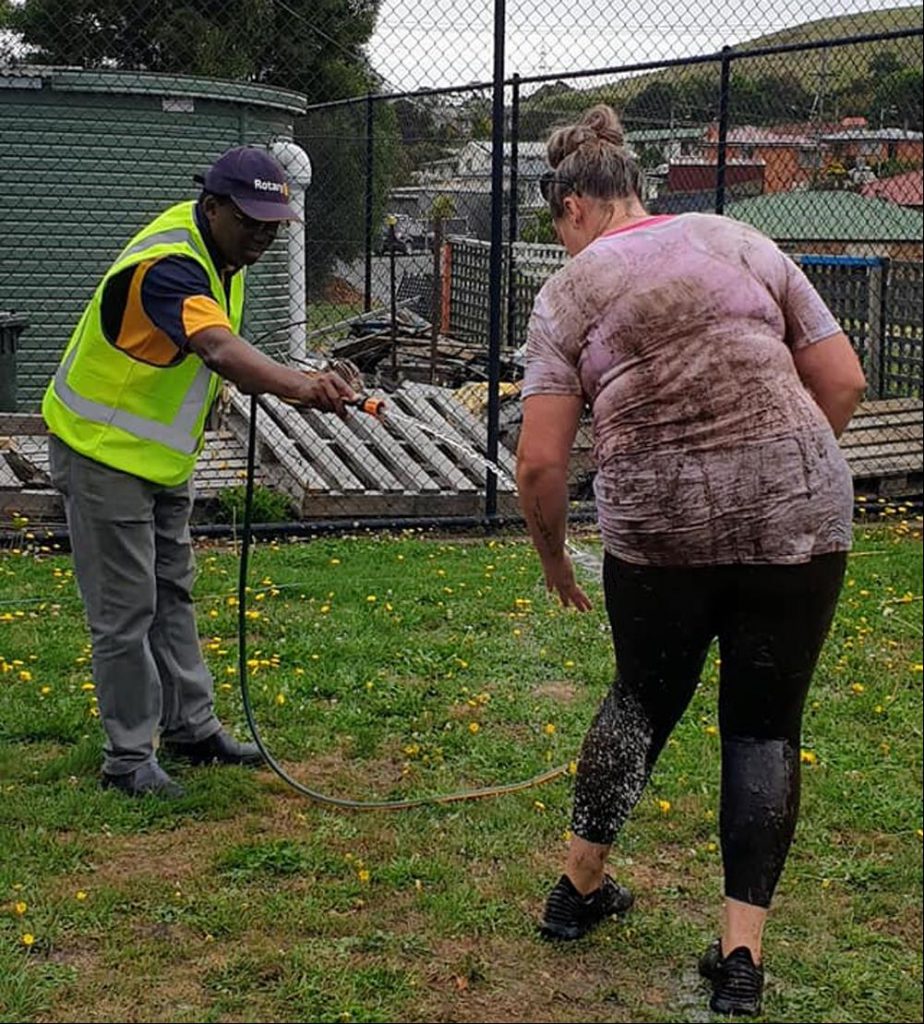 At our meeting on March 7th, we commemorated  International Women’s Day. Brielle Gardam was our Guest Speaker.

Brielle had been our nominee to attend this year’s National Youth Science Forum (NYSF). Normally, the Forum is held in Canberra and/or Brisbane, however, the presence of Covid virus meant this year was different: Week 1 was effectively a “Zoom”-like gathering and Brielle was sitting at home. In Week 2, she did manage to visit Monash University in Melbourne, which she found to be absolutely huge and very hard to explore in any detail.

Some things she experienced: extracting DNA from strawberries, talking with scientists at the very large proton accelerating synchrotron in Switzerland and hearing from scientists in Brisbane about the technical issues involved with design and delivery of a Mars lander onto the surface of that planet.

Despite the enforced change of plan, Brielle found NYSF very rewarding. Prior to NYSF, she had just one idea of what she would do in future, but now she has dozens of possibilities to consider.

Throughout her talk to the Rotarians and other guests, it was  obvious that Brielle is a very capable girl who is unlikely to be fazed by any ‘roadblocks’ or challenges put in front of her in future.

Brielle was a most suitable person for us to have as the Guest Speaker this year when we commemorated International Women’s Day. 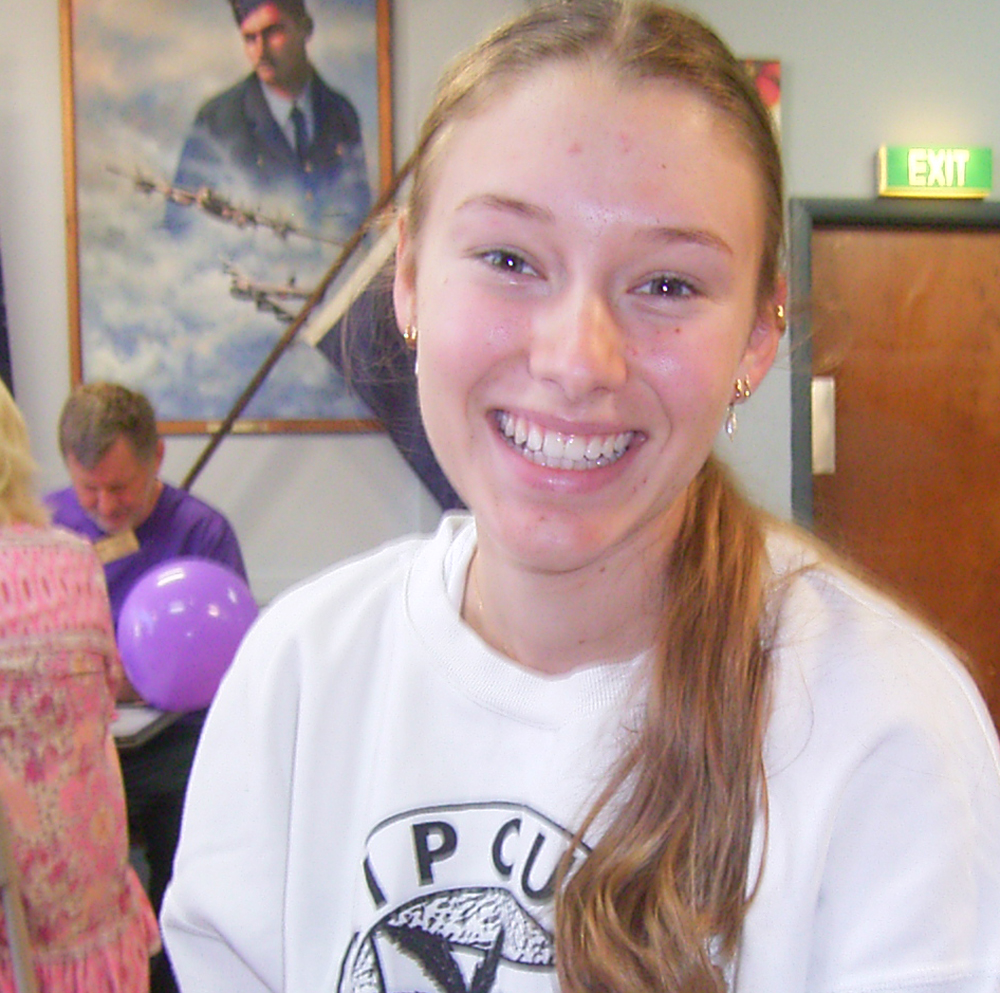 A “Men’s Table” in Burnie

On Feb. 28, Burnie Rotary hosted Mr Ben Hughes, who helped start the “Men’s Table” movement in Sydney in 2011. Ben moved  away from Sydney, but others in that first Table still meet once a month. Ben came to Launceston six months ago and has already helped establish four Men’s Tables in Tasmania; two more are soon to start.

A Men’s Table (see https://themenstable.org/) creates a unique environment for men to talk  about their lives, their challenges, their highs and lows with a group of men whom they learn to trust and respect.  The Vision: Healthy Men, Healthy Masculinities, Healthy Communities.

A Men’s Table creates a sense of belonging, community, peer support and camaraderie that is lacking for many men; even for some who already have a group of mates. A Table can begin with two or more men, but  membership of any able is capped at twelve; there can be several Tables in a town if demand warrants.

There are only a few simple rules:

The Men’s Table survey From Couch to Community in 2021 was completed by 98 men across 12 Tables, who were asked: In the past 12 months –

53% of respondents had experienced a mental health issue and 19% had experi-enced a feeling that life was not worth living.

Ben will be starting Tables on the North West Coast and would love to hear from any men who are interested in helping themselves but equally important helping other men. Ben can be contacted at ben.hughes@themenstable.org  or 0424 99 33 66 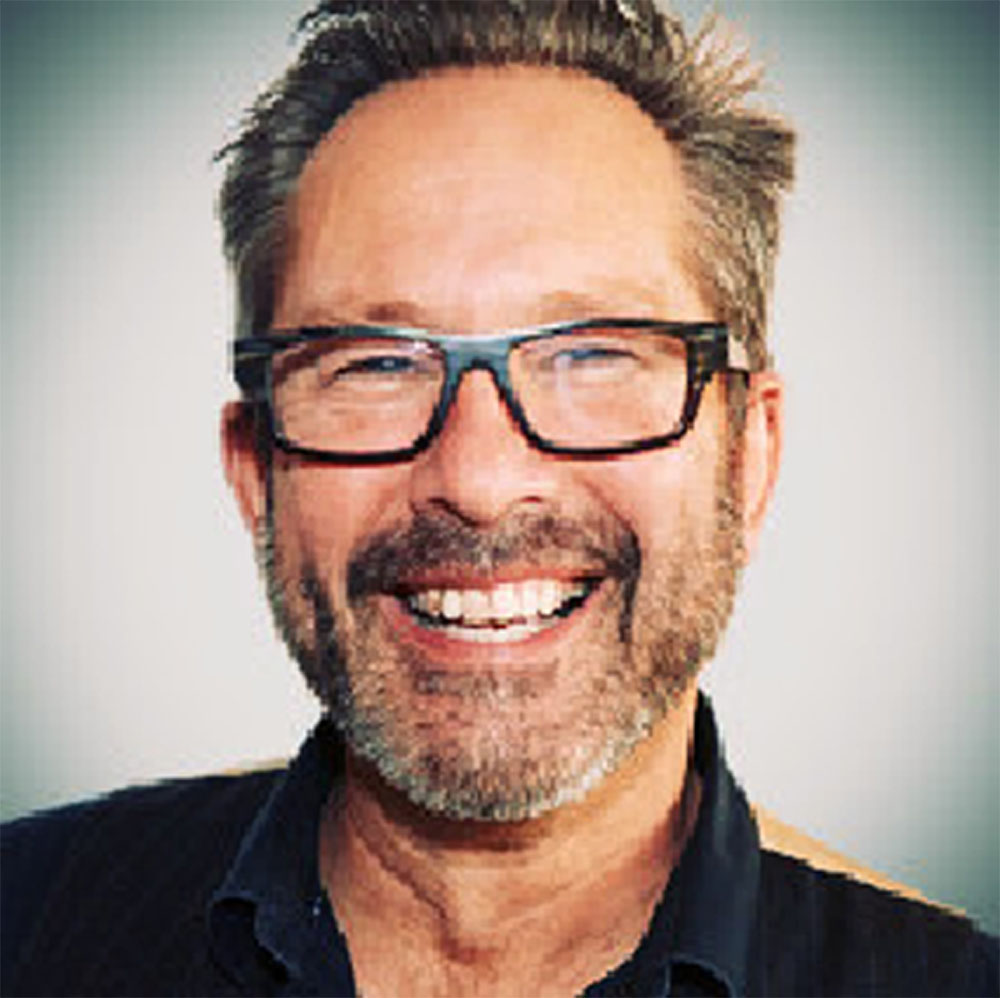